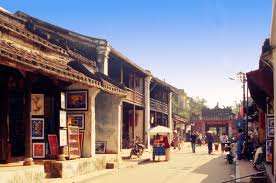 Hoi An is a little coastal city of Vietnam. It is located in Quang Nam province and is home to approximately 120,000 inhabitants. It is recognized as a World Heritage Site by UNESCO. Know as one of the best attractive destinations in South east Asia, Hoi An is famous for typical traditional architecture, silk also some agriculture production and beautiful beach. Hoi An Ancient Town is an exceptionally well-preserved example of a South-East Asian trading port dating from the 15th to the 19th century. Its buildings and its street plan reflect the influences, both indigenous and foreign, that have combined to produce this unique heritage site.

The town is a special example of a traditional trading port in South-East Asia which has been completely and assiduously preserved: it is the only town in Viet Nam that has survived intact in this way. Most of the buildings are in the traditional architectural style of the 19th and 20th centuries. They are aligned along narrow lanes of traditional type. They include many religious buildings, such as pagodas, temples, meeting houses, etc., which relate to the development of a port community. The traditional lifestyle, religion, customs and cooking have been preserved and many festivals still take place annually.

Hoi An possessed the largest harbour in Southeast Asia in the 1st century and was known as Lâm Ấp Phố (Champa City). Between the seventh and 10th centuries, the Cham people controlled the strategic spice trade and with this came tremendous wealth. The former harbour town of the Cham at the estuary of the Thu Bồn River was an important Vietnamese trading centre in the 16th and 17th centuries, where Chinese from various provinces as well as Japanese, Dutch and Indians settled. During this period of the China trade, the town was called Hai Pho (Town on Seaside) in Vietnamese. Originally, Hai Pho was a divided town with the Japanese settlement across the “Japanese Bridge” (16th-17th century). The bridge (Chùa cầu) is a unique covered structure built by the Japanese, the only known covered bridge with a Buddhist pagoda attached to one side

The architecture of Hoi An, which is almost entirely of wood, is of considerable interest. It combines traditional Vietnamese designs and techniques with those from other countries, above all China and Japan, whose citizens settled there to trade and built houses and community centres to their own designs.
The local team of Vietnam Motorbike Tour Expert is offering some options for short motorcycle tours from Hoi An to some nearby rustic villages or highlands and coastlines as well.