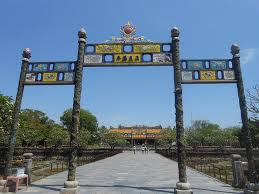 Hue is one of 3 ancient capital cities of Vietnam during thousand years of history, but unlike the others, Hue remains a lot of originally historical vestiges as in this ancient Capital City.

Hue is in central of Vietnam which is closed to the highlands, the Ho Chi Minh trail, DMZ and some nice beach towns so taking a Hue motorbike tour around is a great choice when bikers or fan of motorcycle touring are here.

On the Northern bank of Perfume River has relics consisting of palaces, which were constructed as arc defensive ramparts with 11km length. This valuable construction includes more than 100 architectural works which were extremely reflected the life of Emperors and mandarins under Nguyen’ reign. Situated in the middle of hills on the Southern bank of Perfume River are very beautiful tombs of Nguyen Kings. Among these tombs are the four famous ones with the name and the arrangements of the tomb reflected each Emperor’s points of view, personality, and tastes. This is majestic Gia Long tomb, imposing Minh Mang tomb, poetic Tu Duc tomb and magnificent Khai Dinh tomb.

Hue is also an important center of Buddhism. In Hue and its surrounding still exist tens of pagodas constructed more 300 years ago, and a hundred of temples and pagodas built in the early century. They take an important role in making Hue more attractive.

Besides, Hue is a place where the royal music is originated, and a place with traditional famous dishes and sophisticated handicraft.

As a unique city of Vietnam still remains its form of City under Middle Age and the constructions of monarchic, Hue has become a big and an invaluable museum. Therefore, vestiges in Hue ancient capital have been classified by the government as a very precious property and on December 1993 Hue has been recognized as a World Cultural Heritage Site by UNESCO. There are air way and railway from Hanoi to Hue, but take a motorbike tour from Hanoi to Hue on the Ho Chi Minh trail is always great choice for any bikers. Vietnam Motorbike Tour Expert team do organize some options for Hue Motorbike Tours to North  or South. Please contact us for more details.