Sapa – A Paradise for motorcycle Tours in North Vietnam 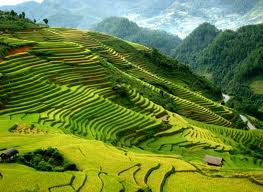 Sa Pa is located in Lao Cai province – Northwest Vietnam, 350 km from Hanoi, and nearby the Chinese border. The Hoang Lien Son ranges dominate the district, which is at the eastern extremity of the Himalayas. This range includes Vietnam’s highest peak – Fansipan Mountain at 3,142m above sea level, and a vast area covered by thick forest, which is very rich in wildlife. The township of Sapa lies on a hill station at the attitude of about 1,600m and was built by the French into a famous summer resort with some hundred colonial villas.

Sapa is not only a ideal destination for honeymoon, for easy tour by bus, train and for people who love trekking but also a great area for motorbike touring in Vietnam. Because of its high attitude, the road to Sapa is wonderful for motorcycle ride, it offers incredible view of green mountains with terrace fields and peaceful villages of the hill tribes. 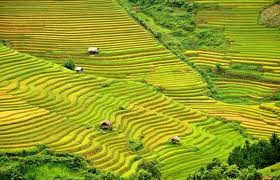 The charm of the Sapa is a good combination between the minority people and nature. This is seen especially in the paddy fields carpeting the rolling lower slopes of the Hoang Lien Mountains. The impressive physical landscape which underlies this has resulted from the work of the elements over hundred of years, wearing away the underlying rock. On a clear day, the imposing peak of Fan Si Pan comes into view. The last major peak in the Himalayan chain, Fansipan offers a real challenge to even the keenest walker, the opportunity of staggering views, and a rare glimpse of some of the last remaining primary rain forest in Vietnam

Famous for its breathtaking landscapes, Sapa is also an ideal inhabitation for a great diversity of ethnic minority peoples. It is likely 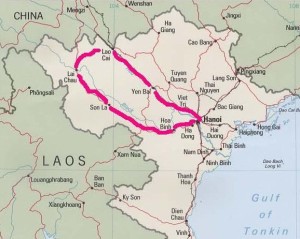 that, Sapa was first inhabited by highland minorities of H’mong and Zao groups who immigrated from southern provinces of China, later came the Tay, Zay, and a small number of Xa Pho to form the 5 main ethnic groups which takes about 85% of the district’s population today. The Vietnamese, in small number, immigrated from lower land to the region, mainly living in town, working in government offices, schools, hospital or running their own mini hotels, shops, … while most other ethnic peoples live in small hamlets and villages scattering on the mountains and valleys throughout the district. Until middle of 20th Century, the H’mong and Zao, majority of Sapa’a population, still lived shifting style and practiced slash and burn agriculture which caused huge damages to the nature. Nowadays, most of them have changed into sedentary one basing on intensive farming and work their land on sloping terraces cultivating rice and corn, since the vast majority of the land is mountainous. However, self subsidiary is still the main feature of their production and lifestyle with almost no contact to the out side world until 1990 when tourism started in the region. On the other hand, due to hard weather & climate condition, only one crop can be cultivated in a year and the productivity depends much on nature thus led to a fact that food shortage is quite common here. The best time for motorbike ride to Sapa is from July/August to December and February to May.

Beside its beauty of nature and culture, Sapa is also a paradise for Vietnamese bikers or any fans of motorcycle touring so we think discover Sapa by motorbike is a great choice.

Vietnam Motorbike Tour Expert do have some beautiful options for Sapa motorbike tour and Vietnam motorbike tours including Sapa so please contact us for details and customize your own tour to Sapa.