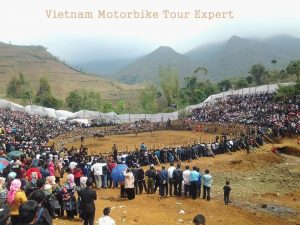 Vietnam becomes more and more attractive destination for the tourists all over the world. There are more and more foreign tourists traveling to Vietnam so what are the reasons? Beside the reason of the reasonable price, natural beauty…Vietnam also attracts tourists with thousands of traditional festivals. The festivals do not only reflect the local culture, they’re also meaningful to the daily life of the Vietnamese people.

Traditional festival is a form of cultural activities, it is a spiritual product that is formed and developed throughout the course of Vietnamese history. The saying “When drinking the water, think of the source” is the tradition of thousands Vietnamese generations. Traditional festival is the event reflecting that precious tradition of the community, honoring the sacred image, holly Spirit, Shen or God who are national legend or real people that contributed a lot for the country. They can be war heroes, explorers of the new land, creators of an occupation, or someone who helped their people while facing natural disasters, killed aggressive carnivores or gave medical care to other people. The legendary characters are imaginary which have good effects on people’s thoughts, lead people’s mind into good direction, help people to live happy lives. Traditional festival is a tribute event that shows gratitude towards god’s merit to the nation and community. Festival is an opportunity for everyone to return to human origin, natural origin and origin of the nation each of which has the sacred meaning in people’s mind.

Traditional festival shows the community’s cohesion, it manifests the village community’s strength, or wider, national strength. They worship the same gods, shared the same goal which is to unitedly overcome the hardships, to live the happy and prosperous life. It is the demonstration of the eternal cultural beauty inherited from our forefathers.

Festival also reflects a need for creativity and enjoyment of material cultural values and it is spirit of all walks of life; is a form of education transferring to the next generation to preserve and promote the precious traditional values. Traditional festival is the combination of rituals with spiritual elements; competitive games and entertainment. The Vietnamese traditional Festival is also a chance for people to release stress, to express their sorrows, anxieties to their gods, and pray for their help, and hope that Gods will cherish them to overcome challenges in life and lead them to a brighter future. 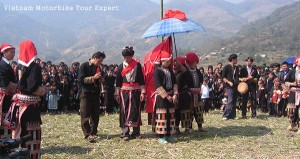 Most festivals in Vietnam are associated with historical events, remembering who have contributed during wars against the foreign invaders so the games played the traditional festivals usually have sturdy features of the chivalry such as: firing arrows competition, wrestling (Co Loa festival), running, fighting contests (Vi Khe, Nam Dinh), buffaloes fight, roosters fight….
There are some other festivals that praise the fertility of people and to wish for more offspring since we have agricultural tradition in which labor force is crucially important.
Traditional festivals are mostly held in spring. Right after Lunar New year festival- the event people spent much time preparing for and hording food for, is the time seeding the rice for the first harvest of the year, there are not much left to do afterwards, and festivals are normally held during this idle time. Besides, the warm weather in spring is favorable for holding festivals. The two elements is the perfect combination that makes spring the festival time.

There are, of course, many traditional festivals throughout Vietnam. Every festival is attached to a place, this place can be a village, a district or a town. This is an indispensable fact of Vietnamese people’s life. Thanks to the diversity of the holding places, there is wide variety of the types of Vietnamese traditional festivals. Each festival has its own meaning and its way of celebrating, that is an attractive point for tourists when visiting Vietnam. Below are some of popular festivals in Vietnam that tourists should not miss when traveling to Vietnam.

Every year, on 9th January on Lunar calender, people living in Ta Phin commune ( Sa Pa, Lao Cai province) hold a festival called singing festival. This is the chance for young people to bring their youthfulness and their desiring-for-love hearts into their songs and sing it in the hope of finding the other half of their soul. Captivating melodies of love songs, vibrant colors of the clothes from different ethnic groups attract many people from even far mountains to come, tourists of course can not resist, they come to feel the love in the air, to smell the blossoms and feel the warmth of spring. This festival has been the wonderful match maker for such a long time that even the local can not remember how long it has been here,and how many couples have been married from these love songs. 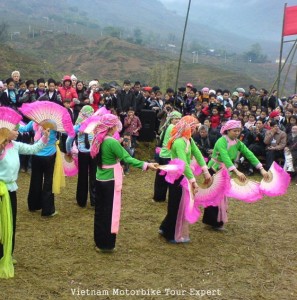 There is a unique festival of Dao ethnic group you must see – the “Dancing over fire” festival. This festival takes place every year to pray for good weather, harvests, bringing warmth to the people, dispel the cold mountainous weather. The chosen ones are strong healthy guys. The shaman will do some mysterious rituals, praying the Gods give the chosen men strength. After the shaman finish the first rituals, the men have shivers, signaling they are about to receive the strength and courage to jump and dance on the embers in front of people. The shaman drum become more and more impulsive, the men dance with stronger movements and jump on the embers. What a spectacular and unique scene, it really makes you feel closer to the gods above.
Nowadays, bullfighting (or buffalo fighting) is still one of the most famous festivals. It has been maintained and developed in the plains and some place in midland. This festival although a little bit violent but it is an indispensable features of agricultural culture in which the buffalo is an essential animal and the strength of them is one of the most crucial factors. This festival is so famous that even the guests have to come early to reserve a good seat. A clan or village owns “the champion buffalo” feel very honored, proud and have more confidence in a year filled with health, luck, good weather, harvest …

Almost all the provinces along the coastline have their own boat racing competition. According to the researchers, boat racing competitions originated from the worship to god whale, earth spirit and river spirit. It represents the love of the fishermen to the sea and the dream to conquer it. The fishermen show their strength, their solidarity and their skills in this contest.

Traditional festivals play a very important role in culture. Although many of them can not maintain the original rituals but the spirit and the meaning of them will never change in each Vietnamese mind. We inherited precious tradition from our forefathers and we will do our best to maintain and develop it in our own way.

Traveling Vietnam by motorbike to remote areas at the New Year time you’ll have more chances to join at meaningful festivals of the local hill tribes. Vietnam Motorbike Tour Expert team is ready to travel and discover the the meaning of the traditional festivals in Vietnam.