This 9 day motorbike tour on Ho Chi Minh trail is one of the best in our collection of motorbike tours Vietnam . The ride start from northern mountain of Vietnam where you can see the colorful culture of the country by riding through beautiful villages of the hill tribes, riding on the historical trail where there are plenty of vestiges and moved stories about Vietnam war and then ends in the central of Vietnam in which long, sunny and sandy beaches are waiting for only you.

The Hanoi motorcycle tour to Phu Yen starts at 9AM. We will try to ride on the
dirt country road to avoid busy traffic in Hanoi. We will be at Son Tay town after one our riding, stop for a while to enjoy tasty local café and then keep motorcycling up to the north. After lunch, ride on the winding mountain road to northwest of Vietnam – Son La to get some of the best mountain views on Lung Lo Pass, And then heading down to Phu Yen – a small town between mountains and green rice field where we stay overnight.
Stay in a hotel. 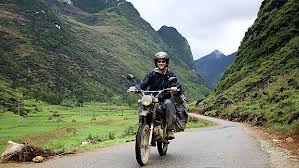 This motorcycle tour to Mai Chau is the highlight of the trip. With many small roads that lead into the mountains around Mai Chau, so we’ll take the chances to take the most beautiful picture of Vietnam mountains and to see and learn more about culture of H’mong, Dao and Thai people. We will take on the challenge of an old road built by the French army. This great Vietnam motorbike tour to Mai Chau will finish at about 4 PM in  village of  the Thai people and then we will spend the rest of the day for exploring nearby villages.
Overnight in a Thai ethnicity stilt house in Mai Chau.

After enjoying breakfast in the peaceful village of Mai Chau, we keep riding on a small, spectacular and paved trail along the Ma river until Cam Thuy town where we stop for lunch. After lunch, we will start the enjoyable motorbike tour Ho Chi Minh trail, just enjoy the easy riding on the legendary Ho Chi Minh trail and then stay all the way to Tan Ky town where we spend the night in a hotel. 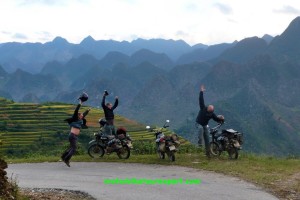 Ride on Ho Chi Minh Highway until Pho Chau where we stop to visit the Ho Chi Minh Trail victory monument which is in fact the real starting point of our Ho Chi Minh road .

Ride all the way to Phong Nha – Ke Bang, the biggest and also the most beautiful cave in Vietnam and Indochina and is now a UNESCO World Natural Heritage site. The karst formation of Phong Nha-Ke Bang National Park has evolved since the Paleozoic (some 400 million years ago) and so is the oldest major karst area in Asia. Subject to massive tectonic changes, the park’s karst landscape is extremely complex with many geographic features of considerable significance. The vast area, extending to the border of the Lao People’s Democratic Republic, contains spectacular formations including 65 km of caves and underground rivers.

Spend the morning for Boating and exploring the World Heritage site of Phong Nha where local civilians and military sheltered from American bombing during wartime. After lunch we motorcycle down to the coastal town of Dong Hoi, which was heavily shelled by US warships during the war. At a hotel over looking the beach, we can take in some sunbathing by the beach. Overnight in Dong Hoi.

Heading down to the south to get closer to the 17 parallel – the former border between North and south of Vietnam where were once sprayed heavily by Agent Orange towards the former DMZ. There is still much evidence of bombing on the mountain sides and from time to time we will see remnants of the original Trail. We take in the Vinh Moc tunnel, the famous Hien Luong Bridge (former demarcation line between North and South Vietnam, the Truong Son Cemetery and finally Khe Sanh (former US Marine base). Overnight in Khe Sanh.

keep motorcycling to the south over the Da Krong Bridge (built by the Cubans in 1973) into the infamous A Shau valley, an area of intense wartime activity. Passing Hamburger Hill and mountains still barren due to the extended effects of Agent Orange, we arrive at A Luoi, where there are many Bru Van Kieu hill tribe people. Then, cruising through green back country down the steep Me Oi Pass, we continue on to the beautiful city of Hue which lies along the banks of the Perfume River. Overnight in Hotel in Hue.

After breakfast, we have chance to discover the famous citadel of Hue and some other attractions. After lunch, we will Join the National Highway 1 and head up the Hai Van Pass (Cloudy Pass) before the World Heritage site of Hoi An, a major trading centre in SE Asia in the 16th and 17th centuries. Overnight in Hoi An.

Day 9: Hoi An for fresh body up or relax

Enjoy a free day to explore Hoi An by foot. With fine wining and dining (including a range of Hoi An specialties), impressive architecture, fantastic tailoring, endless shopping, and a glorious beach, there is no shortage of activities to indulge in. After lunch, we will say goodbye and our guide flies back to Hanoi from Danang.

SaPa Tour By Train and Motorbike 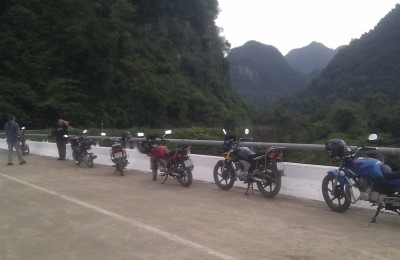